Man is not a rational animal, he is a rationalizing animal.

Roger Sayles’ mentor, John Benson, went to great lengths and much personal sacrifice to uncover the legal concepts and facts presented in “From Sovereign to Serf” and “Taxation by Misrepresentation.” For example, John lived in a warehouse and slept on a mattress on a concrete floor for over 16 months to save on expenses and maximize the amount of time he had to do the necessary research for the books. In poor health and suffering from cataracts in both eyes, John read case after case with a magnifying glass as thick as the bottom of a Coke bottle — holding it only inches away from the pages he studied.

Why? So that today you can read and internalize this valuable information. Because Your freedom from the system isn‘t about simply signing and filing a few pieces of paper.

Our Founding Fathers already limited government and gave you freedom and liberty. It is up to you to know their intent and demand your rights. It is your duty, in fact, to defend against all attacks the freedoms our Constitution protects.

John Benson believes as John Adams did, who said, “Liberty cannot be preserved without general knowledge among the people.”  That is why so often during his long seminars he repeated the phrase, “The ONLY WAY I can protect my liberty is to help you protect yours!” Which is also why in the following article John asks, “What is your definition of Freedom?”

You have to know what a thing is to defend it.

Definition of Freedom: A Monkey Cries, “Let me out!”

What is your definition of Freedom? In my tax seminars across the Country, in 1992, I taught that the desire for ‘freedom’ is perhaps the most powerful impulse of the human heart. I related a story written by the radio personality Paul Harvey in a Los Angeles newspaper, January 1, 1980 where he gave life to the definition for freedom.  Here are Mr. Harvey’s own words from that article:

CHIMPANZEE VOICES PLEA: I’ve just endured one of the most cold-sweat experiences of my life. I heard the “voice of an animal”. When I relate my experience of having heard an animal “talk”, I am not referring to the mimicry of a parrot. Here’s what happened.

My son, Paul, researching a “Rest of the Story” story for broadcast, became acquainted with a research project at the University of Oklahoma. There they have been teaching an animal to talk—specifically a 15 year old female chimpanzee named Washoe. This is the basic recognition communication, mostly single unit: big, small, up, down. Since 1966 this chimpanzee has learned 140 signs in Standard American Sign Language.

After all this learning and more learning, the project directors decided that Washoe was prepared now to “conceptualize.” In lay language, instead of imitating some human’s words—the chimp was ready to express thoughts of her own. She had learned enough words to cross-reference those words and “originate” expressions of her own. Now, understand Washoe is a pampered animal in the University Laboratory – well fed, physically comfortable, safe from harm. She had “security”. And yet—when she was able to put words together on her own into a phrase—these were the first three. And she has said them again – repeatedly.

To visitors the voice from the cage is saying:  “LET ME OUT!”

Washoe’s cry for FREEDOM says it all.

Even a monkey knows the definition of freedom.

No one wants to live in a cage.  No matter how well fed, how pampered you may be, no matter how secure you may feel, the cry for FREEDOM, “Let me out,” is perhaps stronger even than the desire to live.

That is why soldiers will throw themselves on live grenades in a foxhole, to preserve the lives of their fellow soldiers.  We will, under certain circumstances, give our last full measure, even our very lives, for the sake of preserving freedom for ourselves and our loved ones.  That is the reason that I have devoted over 35 years of my adult life, seeking answers to the American tax laws – like Washoe, I wanted to be FREE!  That is the reason I have devoted my life to spreading the knowledge I have acquired – I know others also want to be free! 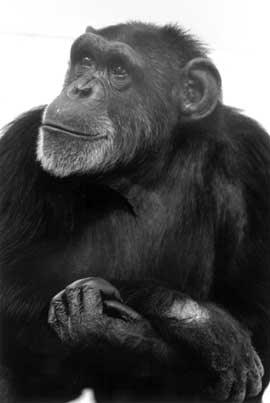 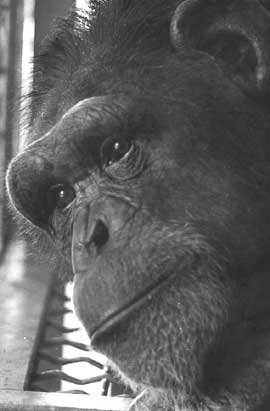 My definition of freedom as to tax laws is contained in my book: Taxation by Misrepresentation, the Truth about Income Taxes in Plain English.

The best definition of freedom and explanation as to how we lost our rights as freemen, how the government became lord and master and how we became its serfs is contained in this book, by Roger Sayles: From Sovereign to Serf, Government by the Deception and Treachery of Words.