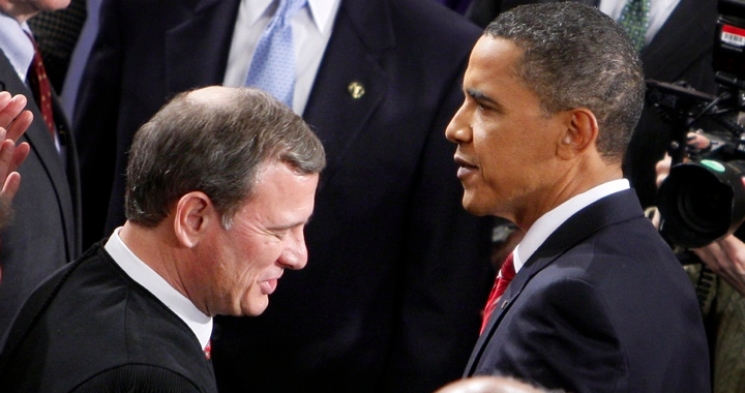 Obamacare, the Constitution, and the Taxing Power

Written by  Joe Wolverton, II
We’re all familiar with the classic shell game. We follow the ball. We know the huckster’s tricks and we know he is moving it around to trip us up, but we believe our eyes are faster than the huckster’s hands.

Since the day in November of last year when the Supreme Court announced that it would hear the ObamaCare case, Americans have watched the ball of the individual mandate. We reckoned that we knew where the huckster was going to put it and some of us thought there was even a chance that it would fall off the table completely.

Then yesterday, after we all had placed our bets, confident that it would show up under the Commerce Clause shell, the huckster ended the game by revealing the location of the individual mandate ball: It was under the Taxation Clause shell. We all guessed wrong and we all lost.

Perhaps the strangest part of Thursday’s Supreme Court ruling upholding the constitutionality of ObamaCare was the reasoning relied on by Chief Justice John Roberts to justify the decision.

In plain language, Roberts said that although the government cannot force you to buy a commodity (health insurance,) it can tax you if you don’t.

And therein lies a bit of a sticky wicket for the Chief Justice, as well. Despite the government’s attorneys arguing that the individual mandate is a penalty and not a tax (President Obama himself adamantly made such a denial), Roberts dismissed the administration’s label, declaring that the penalty was a tax and therefore permissible under Article I, Section 8 of the Constitution.

In the majority opinion, Roberts wrote that paying a penalty for not obtaining insurance could be interpreted as a tax on non-activity, and as “the Constitution permits such a tax, it is not our role to forbid it, or to pass upon its wisdom or fairness.”

Given the fact that the Affordable Care Act explicitly states that the individual mandate penalty is not a tax and that its proponents universally defended the provision on that same ground, what Chief Justice John Roberts did yesterday amounts to no more or less than scrapping ObamaCare and giving us RobertsCare.

Another difficult dilemma not addressed by the Court is the economic reality that a tax is only permissible constitutionally to raise revenue. Under the applicable terms of ObamaCare (as rewritten by Chief Justice Roberts), if everyone complies with the individual mandate and purchases a qualifying health insurance plan, no revenue would be raised. How, then, is this a tax? Of course, it isn’t. It is a penalty and it is unconstitutional.

On the issue of constitutionality, a plain reading of the taxing and spending power granted to Congress by the Constitution reveals that taxes of any sort (fees, imposts, duties, etc.) may be imposed by Congress only in order to fund the carrying out of its other constitutionally enumerated powers. There is no constitutional power to enact ObamaCare or anything like it. So again, the individual mandate does not qualify as a tax and is thus an impermissible attempt to impose a penalty using the purported power of the Commerce Clause.

If one accepts the Court’s opinion as settled law (which our Founders to a man most certainly would not), then we must examine that decision in light of the history of the Congress’s authority to raise revenue through the imposition of taxes and then to subsequently spend the money they raise.

As students of the history of our Republic are aware, the primary engine that drove the drafting of our Constitution was frustration over the inability of the Articles of Confederation to accede to the central government power sufficient to fulfill the needs of the United States.

By granting to Congress the ability to impose taxes and other duties without the express and unanimous consent of the states, the Constitution relieved the federal government of its obligation to rely on the states for funds necessary for its rightful ends.

The identification of those rightful ends, then, is the key to understanding not only the tax and spend power, but the faults in the reasoning behind Chief Justice Roberts’s ObamaCare ruling.

Given that it was created by men who by and large were jealous of central authority and wary of its historic propensity to grow by usurpation of state privileges, it is no surprise that in the very act of granting to Congress the power to spend, the Constitution places strict and specific limits on that power.

Simply stated, the Congress is empowered by the Constitution to raise revenue necessary to pay for only those things within its constitutional bailiwick — things of national importance. As understood by the Framers, that included paying off the national debt, providing for the defense of the United States, and any other national (that is to say, general) expediency.

As James Madison himself wrote regarding the concept of the general welfare:

If Congress can do whatever in their discretion can be done by money, and will promote the general welfare, the Government is no longer a limited one possessing enumerated powers, but an indefinite one subject to particular exceptions.

So you see, this very limited power to tax was not, as Roberts would have us believe, a carte blanche in the wallet of the government permitting it to tax and spend in any manner it sees fit. Quite the contrary.

So, when is a tax not a tax? When it is a penalty. And in the case of ObamaCare, the individual mandate imposed by it is not only not a lawful exercise of the taxing power, but it is an unlawful exercise of the power to regulate interstate commerce, as well. An exercise that the Chief Justice himself described as unconstitutional in the majority’s opinion.

Surprisingly, in this opinion, Chief Justice not only contradicted himself, but he failed to account for years of precedent in this arena, as well.

In fairness, the relationship between regulation and taxation is a tricky one. As one commentator in the New York Times explained:

Through the early 20th century, the Supreme Court was cognizant of this tight relationship between the power to regulate an activity directly and to the power to tax it. The basic idea relies on a simple economic insight: taxation and regulation are close substitutes, so a limitation on one power matters little if the other power is still available. There is no practical difference between ordering an action, and taxing or fining people who don’t do that same thing. If the Constitution limits direct federal powers, it must also limit Congress’s indirect power of taxation.

It would seem that the Chief Justice has conflated the two powers in a moment of regrettable constitutional confusion.

The Chief Justice’s decision to disregard this irrefutable aspect of constitutional law is unforgivable. A man of his undeniable skill and impressive education should be counted on to understand this one very crucial tenet of the taxing power and its relationship to regulation: If direct regulation is beyond the scope of the Commerce Clause (as he held), then taxation as an indirect route to the same regulation should be off limits as well (as he failed to hold).

The Court’s decision is a part of history now, and so it remains with the states to repair the fences of federal power that they put up so many years ago.

1 thought on “Obamacare, the Constitution, and the Taxing Power”