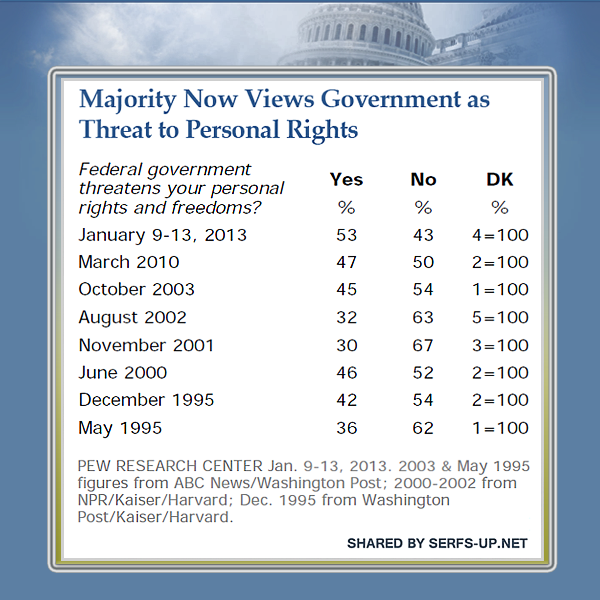 The latest national survey by the Pew Research Center for the People & the Press, conducted Jan. 9-13 among 1,502 adults, finds that 53% think that the federal government threatens their own personal rights and freedoms while 43% disagree.

In March 2010, opinions were divided over whether the government represented a threat to personal freedom; 47% said it did while 50% disagreed. In surveys between 1995 and 2003, majorities rejected the idea that the government threatened people’s rights and freedoms.

By comparison, there has been little change in opinions among Democrats; 38% say the government poses a threat to personal rights and freedoms and just 16% view it as a major threat.

People who say they have guns in their households continue to be more likely than those who do not to say that the government is a threat to their personal rights and freedoms. About six-in-ten (62%) in gun-owning households see the government as a threat, compared with 45% of those without guns; this gap is no larger today than it was three years ago.

Just 20% of Americans say they are basically content with the federal government; 58% say they are frustrated while 19% say they are angry. For the most part, these views have changed little during Obama’s presidency. However, the percentage saying they are content with government sank to a low of just 11% in August 2011, following protracted negotiations between the president and congressional leaders over raising the debt ceiling. The same survey found that the percentage expressing anger at government had reached 26%, and just 19% said they trusted the government at least most of the time.

Views: Problem is with Congressmen, Not the System

For two decades between 1985 and 2005 Congress was generally viewed more favorably than unfavorably. The low point during that period came in the fall of 1995 – just prior to the government shutdown of that year – when 42% offered a favorable opinion of Congress.

At a time when there are wide partisan differences in opinions about government, there is broad agreement that members of Congress are the problem. Virtually identical majorities of Republicans (58%), Democrats (57%) and independents (56%) say that lawmakers, rather than the political system, are the problem with Congress.

Among moderate and liberal Republicans, 57% view the federal government as a threat to personal rights and freedoms and just 32% say it is a major threat. These opinions, like those among Democrats and independents, are little changed from March 2010.

For the past seven years, a period covering the final two years of the Bush administration and Obama’s entire presidency, no more than about three-in-ten Americans have said that they trust the government in Washington to do the right thing always or most of the time.

Majorities across all partisan and demographic groups express little or no trust in government. However, there continue to be sizable racial, age and partisan differences in these opinions.

More than twice as many Hispanics as whites trust the federal government (44% vs. 20%); among blacks, 38% say they can trust the government always or most of the time.

People younger than 30 have more trust in government than do those older than 30. And far more Democrats (38%) than independents (21%) or Republicans (15%) say they can trust the government at least most of the time.

The Pew Research Center’s 2010 study of attitudes toward government found that, since the 1950s, the party in control of the White House has expressed more trust in government than the so-called “out party.” But partisan differences in trust in government have been much wider during the Bush and Obama administrations than during previous administrations. For more, see “Distrust, Discontent and Partisan Anger: The People and Their Government,” April 18, 2010.

Frustration with Government Is Nothing New

Public frustration with the federal government is not new. Since 1997, only once has a majority said they were “basically content” with the government – in November 2001, two months after the 9/11 terrorist attacks.

Over this 15-year period, majorities have consistently said they are frustrated with government, with smaller percentages expressing anger. The percentage saying they are angry at the government reached a high of 26% in August 2011, following the deal to lift the debt ceiling. Currently, 19% feel angry at government, 58% are frustrated, while 20% are basically content.

In October 2006, during George W. Bush’s second term, those at the opposite end of the ideological spectrum – liberal Democrats – were most angry at government. At that time, 44% of liberal Democrats said they were angry at the federal government, far higher than the share of conservative Republicans expressing anger today.